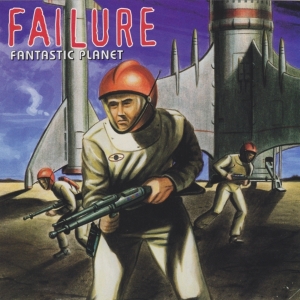 I distinctly remember hearing Failure for the first time; their debut Comfort had been released just as I started my senior year in college, and our FM station, WERS, had received a promotional copy, which I soon found in the freebie bins outside the studio (aka the “here, this sucks and/or is too commercial-sounding and we won’t play it” bins, given the station at the time).  I’d heard a lot of great things about the band and the album, even despite the incessant and often misguided comparisons to the ubiquitous Nirvana.  I can see where they’d get that, if you think loud guitars + quirky chord changes + odd lyrics = Nirvana or one of its clones, but I always felt that was a cop-out, a weak and lazy way to pigeonhole a newly-popular subgenre.

I played “Submission” and “Pro-Catastrophe” from that first album on my radio show on our AM station, WECB, where I was the music director that semester, and I thought they were well worth checking out and sharing with others.  My enthusiasm didn’t get too far, of course, considering WECB’s low-watt reach was ridiculously sketchy, not to mention by that time, the alternative rock purists were refusing to listening to anything remotely commercial, and that WFNX was playing Nirvana, Soundgarden and Pearl Jam every fifteen minutes or so.  Failure unfortunately could not sneak in edgewise into anyone’s playlist.  I don’t blame the band for that at all; in fact, I have to give them mad props for remaining true to the sounds they wanted to create.  They weren’t as Led-Zep as most grunge bands were, they weren’t as hard as any metal bands out there, but they also weren’t deliberately outsider anti-commercial either.

They released a second album, Magnified, in early 1994, which I unfortunately never picked up at the time, as that was during my broke years in Boston, but I did eventually pick it up a few years later while working at HMV.

That was where I fell in love with the band again.

In August of 1996, about a month before I started working at the record store, the band released the video for the single “Stuck on You”, a brilliant and almost shot-for-shot takeoff of the opening credits to the James Bond flick The Spy Who Loved Me, and I was immediately hooked.  I mean, listen to that crunch–it’s drop-tuned a half-step to give it a powerful low end, and balanced with a high end distorted riff.  The whole thing just punches you in the face from the first few seconds, and doesn’t relent until the last few.  Lead singer and songwriter Ken Andrews delivers great vocals here too, drifting lazily through the verses (which, interestingly enough, are about getting a song stuck in your head) but belting them out during the choruses.

One of the first promotional freebies I got from the record store was a copy of this single, a two-track cd shaped like the head of the spaceman on the album’s cover and featuring the album version and the radio edit of the track.  Suffice it to say this track got a lot of play in the back storage room at the time.  Fantastic Planet was one of my first purchases when I first started working at HMV.  As the lone shipping/receiving clerk for the store, I often hung out up back, pricing and security-tagging and processing them into the stock database, but during all that time I’d have a radio going.  That was one of the first things I did when I started the job, actually–I got a hold of a cheap boombox at WalMart and brought it in specifically for backroom listening.  [It wasn’t just for my own entertainment, either…I did that because I knew the label reps would want us to sample some of their wares during their visits.  That worked quite to our advantage, actually.]

I knew I’d love it even before I heard any other tracks from it–the fact that they named it after the 1973 animated French film of the same name (a movie I’d taped years before off USA Network’s Night Flight and watched repeatedly) was definitely a selling point, but I’d heard a hell of a lot of positive reviews as well.  I even snagged a promotional album flat for it as well and had it posted prominently for pretty much the entire time I was at the store.   And yes, I played the hell out of that album for years to come.

The history behind the album is quite interesting, as Ken Andrews and bassist Greg Edwards explain in this recent interview as well as in this promo for the album’s 2010 vinyl reissue both point out that it was recorded during their most tumultuous times as a band.  Come 1995 they’d had issues not just with the label (Slash Records) not quite knowing how to sell the band, and drugs and personal issues were also causing fractures.  And yet, they retained a crystal clear idea of what they wanted the album to sound like, and took delicate care with each and every track before considering it done.  This included the production as a whole–they took care to ensure the running order was perfect as well.  The album also both starts and ends with the same trinkety sound effect loop, but it could be taken two ways: the album is either an unending cycle, or they’re a prologue and epilogue to gauge just how much the cycle has changed from one end to the other.

It’s hard to say exactly what the album may be about, really…while there is a theme of space in the science fiction sense–thus the title–it’s also about emotional space and one’s self within it.  There are songs about drug addiction and psychological breakdowns, but there are also songs about redemption and clarity as well.  Even the opening track, “Saturday Savior”, could be taken more than one way–either a throwaway relationship, or addiction denial.  The album almost has a similar lyrical and musical feel as Pink Floyd’s The Wall, where we don’t quite notice until a few songs in that things are starting to get dark and desperate.  It’s not until “Smoking Umbrellas” that the imagery becomes trippier, the chords of the song drifting in unexpected directions.  The frantic “Pillowhead” follows it up, and the narrator knows full well that he’s deep in addiction now.  By “Dirty Blue Balloons”, he’s at his “Comfortably Numb” phase, wasted beyond help, and at “Pitiful” he’s hit rock bottom.  We’ve hit the halfway point in the album, and we’re not sure where he can go from here.

And that’s when “Leo” arrives–a moment of clarity, where he’s finally able to see himself, and he doesn’t like what he sees and feels.  There’s pain, a misplaced hunger, a sense of paranoia that he can’t quite place.  There’s no real resolution, at least not yet.  The first step is a cleansing, in the form of “The Nurse Who Loved Me”.  A brilliant, beautiful angelic song (which puts A Perfect Circle’s cover to shame) that’s not just about the narrator’s coming clean physically but emotionally as well.  It’s one of the best tracks on the album, deliberately constructed to build tension both in sound and pace, right up until the last second…and ending with a breath of exhaustion and relief.  And by “Another Space Song” and “Stuck On You”, he’s back on the mend.  There’s still addiction–emotional addiction this time–that needs stopping and healing.  He faces it head on on “Heliotropic”, one of the heaviest and angriest tracks on the album.  He’s forcing himself to admit guilt and turn away from the temptations once and for all.  Redemption and relief finally come to him in the epic closer “Daylight”–he’s gone through hell physically and emotionally, most of it his own doing, and he’s made peace with it…now it’s time to make peace with himself.

When I first heard this album, I did pick up on the addiction references, but I also chose to see past them for the overall mood of the album, just as I had back in my teens with The Wall–it wasn’t so much about the actual story being told that intrigued me as it was about the way it was told.  I don’t really pay too much attention to the literal meaning of the lyrics; instead I see the peaks and the valleys in this album as if they’re part of a novel or a movie, with its sequencing taking us on a deep spiritual and emotional journey.  It tells a story, and it tells it without flinching.  It’s because of this that it fell into heavy rotation during my writing sessions for the Bridgetown Trilogy, and helped inspire the ending scene in A Division of Souls.  It’s remained one of my top ten favorite albums, and still gets heavy play–I even have it on the mp3 player I use at the gym.