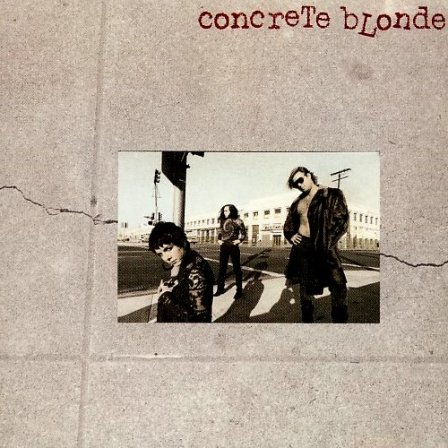 I’m trying to remember when I first heard of this band, because I heard of them from multiple places at the same time.  I remember seeing the advertisement for their debut album popping up in all the music magazines.  I remember “Still in Hollywood” getting play on the early episodes of 120 Minutes (it’s the first song of the first episode I ever taped) and occasionally hearing it on the radio.  I remember seeing a lot of positive reviews of it from both journalists and other musicians.

Concrete Blonde was one of those LA-based bands that flew way under the radar in the mid 80s…a critical and industry favorite but never quite hit the big time. They weren’t as punk as X, and they certainly weren’t glam like most of that scene’s metal bands, either. They were an eclectic mix of hard rock and blues, with a bit of country and folk thrown in. Led by bassist and singer Johnette Napolitano and guitarist James Mankey (he and his brother Earle had previously worked with fellow LA weirdos, Sparks), they had turned their previous band Dream 6 into something unique; it was the hard sound of the back streets of LA. It wasn’t about violence or degradation, though…it was about trying to survive, one day at a time.

This was one of those albums that I dubbed off one of my friends early on, but I ended up with my own copy soon after. I loved Johnette’s smoky voice with all its occasional cracks and growls — it was like hearing a more world-weary Ann Wilson — and I loved the ragged melodies.  It was the sound of exhaustion, the sound of refusing to give up even when the world was bearing down on your shoulders.

And I especially loved their cover of George Harrison’s “Beware of Darkness”, which turned the song from a warning about the music industry to something more sinister.

At the same time, it could be beautifully delicate and tender, such as with “Make Me Cry”, the only accompaniment being Mankey’s acoustic guitar strumming and the occasional overdubbed harmony.

And it was all bracketed by the song “True” — a vocal and an instrumental version — that veered into a bluesy almost Springsteen-like ‘we’ve got to get out of here’ that sets the entire tone for the album.

This isn’t an album that I’d put on repeat or have stuck in my player for weeks on end; this is an album that I occasionally pull out to savor and enjoy. (I did, however, have it on repeat for about a month in the summer of 1989 when I was working for the DPW. It fit my then-current mood of wanting to escape my hometown quite nicely.)  It does feel ever so slightly dated, mostly due to its production; the drums are all flat and there’s a distinct lack of low end, which is a pity considering Johnette really hammers that bass on this record. It’s still a wonderful album and a great example of mid-to-late 80s college rock.

Years later when I started writing Can’t Find My Way Home for the first time (this was around 2009, I believe), I found myself returning to this album as one of a handful of record that fit the mood of the story. And now that I’ve resurrected that writing project again, it’s returned to my playlist.  It’s still one of my favorite albums after all this time.

You may of course remember their eventual rise to minor fame with 1990’s Bloodletting album and their radio hit “Joey”, or their cover of Leonard Cohen’s “Everybody Knows” for the film Pump Up the Volume from the same year, but they never quite achieved that same level of success after that. They put out a handful of albums between 1986 and 1994, and two more in 2002 and 2004, and they’re all worth checking out.