Saying “no” for the first time in years must have come as a deep relief to the Beatles.

By the end of 1966, two versions of the band existed. On the one hand, there was the happy-go-lucky, plucky, mop-topped foursome seen by the media and the fans. They were the boys with the quick wit and the catchy and simple pop songs everyone knew and loved. They were the boys seen in A Hard Day’s Night, Help!, and the American cartoon series. On the other hand…they were four utterly exhausted young men, four professional musicians stuck in an unending purgatory of inane press questions, and surrounded by mindless screaming fans who couldn’t hear a damn note they played anyway. They were a band recording songs miles away from the simplicity of “She Loves You” and “I Want To Hold Your Hand”, songs they couldn’t play live because they were too complex (not to mention the fans still wanted “She Loves You” three years on). They were desperate to move on, before they became sad caricatures of themselves.

By the fall of 1966, they’d had enough. They stopped touring, passed up a large number of public appearances (and willingly provided their “promotional films” for a reasonable price instead), and, to top it all off, decided not to record a second album for the year. Brian Epstein was understandably frustrated and worried, but in the end he accepted the truth that his charges had simply had enough. With this, Epstein, George Martin, and the band all agreed that they would at least put something out for the Christmas season, and EMI decided on a ‘greatest hits’ compilation. It would only be released in the UK and created primarily to ensure that a majority of the group’s songs and singles were available in the UK, including the rarity “Bad Boy” (only released on the US album Beatles VI in 1965 at that point).

In effect, there would be no new releases for the band, at least not until 1967, with a single in February and a new album in June. It was an extremely risky move for any band, but they felt their sanity and their health was worth that risk.

This production was a relatively quick gathering of hits from the past three years, with just a bit of tweaking. The album was to be released in both mono and stereo (just like the previous albums), and considering that all the UK singles to this point had been released only in mono, this called for five of the tracks to quickly be remixed into stereo. This job was given to George Martin, who worked on them over four days (31 October, 7 November, 8 November, and 10 November), with nary a Beatle in sight. The earlier tracks proved to be a bit trickier–many of the 1963 tracks had been recorded on two-track, which necessitated a “fake stereo” remix of “She Loves You” (the original master had been destroyed, so engineer Geoff Emerick created one by placing the low end frequencies on the left and the high end frequencies on the right) and a sort-of-stereo remix of “From Me to You” (the two-track tape divided, music on the left and the vocals on the right). The others were tidied up, and by the last day everything was good to go.

All in all, a quick release for the always-busy fourth quarter, but for a band that had only been recording professionally for just shy of four years, it was an excellent cross-section of their many and varying sounds over that time.  In retrospect, it’s also a great overview of what would be the first half of the Beatles’ main output:  well-crafted and catchy pop, interspersed with the occasional stroke of early genius. 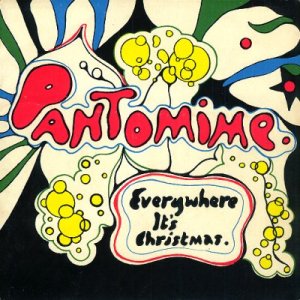 This was quite a change from their previous Christmas releases, and quite possibly their most enjoyable. Instead of being semi-written by their press secretary Tony Barrow, the boys took it upon themselves to write ten short and silly pantomimes–a long-standing British holiday tradition of short and often humorous skits and music put on for family or audiences. The band had done their fair share of them over the years, both with family and with the Christmas shows they’d put on at the Hammersmith Odeon. Recorded not at Abbey Road but in the basement studio of their music publishing office, Dick James Music, it contains a few short original songs similar to old vaudeville tunes interspersed with equally short (and often unresolved!) skits. The end result is nearly seven minutes of comic absurdity and silliness.

It may have seemed to the public that the band had decided to take the rest of the year off, but in reality they remained busy, just on their own terms. It just so happened that they were now in between recording contracts–the previous one had been fulfilled by the singles and the Collection album–and a new one would not arrive until late January 1967, so they did not need to write or record a thing if they didn’t want to. They were at a crossroads–they were no longer a touring band, they had no pressing projects, and their music had evolved beyond anyone’s expectations. They were truly at a point where they could do whatever they wanted.

Once all recording was done for Revolver and the last tour was finished, the four went their separate ways to contemplate their next moves.

John took up director Richard Lester’s offer to take a role in his next film, How I Won the War, and filming took place between 6 September and 6 November (a week in West Germany, and the rest of the time in southern Spain). He shocked the world and got an army-regulation haircut and was given a pair of round-framed National Health glasses for the role of Private Gripweed. The hair quickly grew out after filming, but the glasses became a signature look and to this day are still sometimes referred to as “Lennon specs”. Of course, the schedule of a film production is often long and sometimes quite boring, with a lot of standing around, and not much to do when one is not needed. John of course spent his evenings reading and visiting friends, and writing music. It was here that he would write what would be their next single and take the band into a new and uncharted direction.

Paul, in the meantime, kept busy with friends and family. Earlier in the year he’d purchased and moved into a house on Cavendish Avenue in London, conveniently a few blocks away from Abbey Road Studios, and not too far from Mick Jagger’s house in Regent’s Park. In addition to this, now that he’d gotten his own place, he found himself immersed in art. In late 1965 and early 1966 he’d helped friends open up the Indica Gallery in London, and to decorate his new house he’d started purchasing artworks. He found himself fascinated by Belgian surrealist René Magritte and purchased a few of his paintings, including one of an apple–which would, in a year or so down the line, be the inspiration for their next venture, Apple Corps. And lastly, in late November he had tapped Epstein’s production company for a possible movie scoring project. Out of that came the score for The Family Way, a Hayley Mills drama-comedy based on the 1963 play All In Good Time. The music itself was recorded by George Martin with an orchestra, but one can definitely hear McCartneyisms in the soundtrack. Much of the incidental music contains simple passages that don’t amount to too much, but the recurring theme, later dubbed “Love In the Open Air” for a single release, has Paul writing a haunting yet beautiful theme that could fit easily alongside “For No One” or “In My Life”. [Interestingly, this soundtrack is often not considered the first solo Beatle release, as Paul only scored it but did does not appear on the record.]

George, on the other hand, knew exactly what he wanted to do with his spare time. Since hearing the Indian music played during the restaurant scene in Help!, he’d become fascinated not only with the music but the culture. In early September he flew to India to study the sitar, as well as learn Yoga and philosophy. The journey would be a pivotal one, as it would change his whole outlook on life and become an extremely spiritual person until his passing in 2001. It would also deeply affect his songwriting, which he felt had been stuck in stasis for years (not to mention stifled by his bandmates John and Paul), and had only begun to truly bloom on Revolver. Upon return, his songs would still be overshadowed by the others, but they would be much stronger and more confident. By 1968 he would have his own movie to score (the trippy misfire Wonderwall), and by 1970 he would have a double album’s worth of songs ready to release to wild acclaim.

Ringo, of course, decided to do little but stay with his family in Surrey for the time they spent apart. It may have been the least adventurous thing to do, but given their schedule since they began years ago, I would most likely have chosen the same thing!

By the time they reconvened on 24 November, they began recording that song John had written in Spain, and kick off a new phase of their recording career.