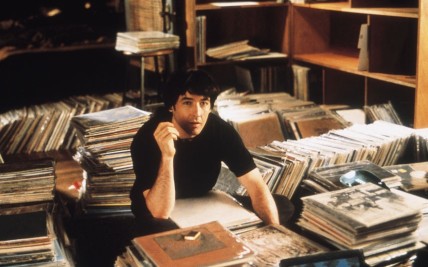 As you’ve probably figured out (or remembered from last year’s LJ missive), I’ve decided to give Record Store Day a pass from here on in, as it’s pretty much become the antithesis of what I feel about record stores.  I bring this up because it’s about that time of year, and the online music blogs are starting to talk about it again.

Back in the late 00’s, RSD was conceived as a way to celebrate the then-struggling record industry, a day for everyone to head over to their local shop, peruse the aisles and come home with some nifty deals and some sweet music.  I was on board for that, considering my own spending habits.  [Hell, just recently I was going through some old bank paperwork and found my checkbook register from 2003-4 — the number of times I hit Newbury Comics during that time was astounding.]  You can still find my 2008 comment in the Public Quotes section of the website (I’m the third quote down here).

Nowadays, I feel this celebration is less about remembering how cool record stores are, and more about that really cool collector’s edition 7″ (only 1000 printed!) of songs I have already but DUDE IT’S RED VINYL.  Really, I’m not kidding — check out the ‘special releases’ for this year.  And that’s just the US listing…other participating countries have even more, sometimes bigger lists.  Not to mention that it’s no secret that many of these end up on eBay at inflated prices before the sun goes down.

Now, I really hate to be cynical about this, I really do.  But last year when I went over to Amoeba to enjoy perusing the bins like I always do, I realized there was no way in hell I’d be able to do so.  The reason was that many of the outer aisles were blocked by an insanely long line of about four hundred people, arms full to bursting with the same collector’s edition purchases and not a single item from the bins. Others not in line were blocking the inner aisles, chatting away and comparing collector’s edition finds and other rarities they’d found over the years.  I gave it about twenty minutes before I walked out of the store, pissed off and emptyhanded.

I never do that.  Not at a record store.  I’ll at least have one or two items in hand when I leave.

SO.  I submit this:  Any day can be Record Store Day if you want it.

Heading to the local shop shouldn’t just be about getting the collector’s edition…not that I’m dismissing those, but I’m of the mind that music shopping isn’t just about getting that rare item.  It’s about finding that cd in the dollar bin that you’d completely forgotten about for a decade or so, with all the memories of that release flooding back to you from out of nowhere.  It’s about seeing what’s hot and what’s not.  It’s about putting those beat-up headphones over your ears to sample a few songs before you buy.  It’s about finding a nifty present for your sister or your husband or your mom or whoever.  It’s even about buying that tee-shirt of that band you’ve just fallen in love with.

And you can do that any time.  Hell, even if you don’t have a local record store you can get to (which, in all honesty needs to be rectified STAT!), head to the band’s or the label’s website and order the cd direct.  Donate to a PledgeMusic or a Kickstarter or a Patreon event, watch the band in the process of recording that album, and get a copy in your hands when it’s all done.  Check out some of the great no-label indie releases on BandCamp.  There’s a shitload of great sounds out there, if you’re willing to search for them.

Because really–it’s about the bands, when you get down to it.  The record store is where they sell their wares.  It’s where you’ll find what you want and need.  And you can do that any day of the week.