Our vacation was fruitful on many different levels, and I was able to fill in a lot of the gaps for my Walk in Silence photo database.  Here’s the first of a few posts focusing on various points of interest related to the 1986-1989 timeline of the book.  Hope you enjoy!

I used to catch the school bus from that intersection. Imagine a surly teen waiting for the moment he could pop on his headphones and blot out the inane conversations going on around him.  Usual soundtrack: The Smiths or Depeche Mode.

This was taken from the front room of my parents’ house, looking up the street.  If this picture looks a little streaky to you, it should — that was a minor five-minute flurry of snow that fell not an hour after we arrived!  But yes, this was similar to the view from my bedroom window looking north, where my desk was.  It never felt like the edge of the world, but more like a hideaway from it.  I spent a lot of time there, listening to WMUA or WAMH (or one of my many tapes or records) while doing homework, writing, or reading.

From Google Maps, as I didn’t get a decent picture:

My high school, which hasn’t really changed that much at all over the years.  A lot of memories of walking through these halls.  I still remember my locker number (103, Lower C hallway, just outside Mr. Jolly’s room).  My house was two and a half miles from here, so I took the bus (#312) and tried to avoid everyone that annoyed me.  The ride took just shy of twenty or so minutes, due to traffic and a few further stops, so I could listen to at least three or four songs on my Walkman before we got there.

Oh, and if you’re curious, this was my standard attire during my junior and senior years, as displayed on Spare Oom couch: 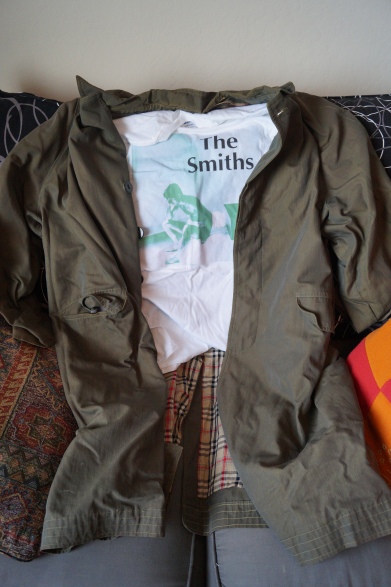 Not the originals — the first duster and Smiths tee both bit the dust from overwear by 1990. Duster 2 was given to me from a high school friend around that time, and I found the Smiths tee on eBay last year.

A tatty green duster (my grandfather’s) and a tee shirt showing the cover of the “William, It Was Really Nothing” single (bought at MSM and cherished as one of my favorites) was all I needed to wear to show my unique weirdness — no need for mohawks or nose piercings in my small town, not when I was already known as the resident college rock geek.

On our recent trip we also made a point to stop in Amherst and Northampton on one of the days, for varying reasons.  One was to meet up with a few friends from the area, but it was also to revisit some of our old haunts.  I’d been heading down that area since the early 80s when my family would shop at the malls down in Hadley; A. is a Smithie from the early 90s and knows the area as well. 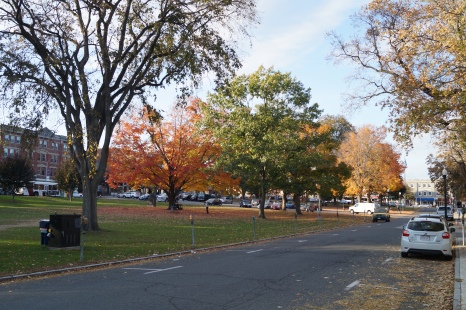 Amherst Common, where we would often congregate

The Five College area is one of my favorite places in the state.  In high school my friends and I would frequent this area all the time, hanging out not just at the mall but on the commons and in the various stores and cafés, talking and laughing and listening to great music.

Panda East was a Chinese restaurant we used to frequent back in 1987-88 (and yes, I am a bit surprised that it’s still there after all these years), often for dinner before or after we did our shopping or going to a movie.  After we ate we’d hang out in this little courtyard in the foreground and talk about all sorts of things.  I remember listening in on a conversation about college plans and silently wishing I could be a part of it.  Alas, I had one more year to go.

The former Bonducci’s across from the common

Almost directly across from Spring Street on the common was a café called Bonducci’s. It was where that Veracruzana Mexican restaurant is now, in that right corner spot.  It was your typical collegiate café that served coffee, sodas (I always used to buy the Snapple vanilla creme, back when they used to make sodas) and pastries.  This was often our last stop of the night, but it was also where we’d often have the more serious conversations. Some of us would trade gossip, others would talk about philosophy (as one did when we tried to pretend we were being all deep and academic).  I would often be the one to initiate the conversations about music, of course.

One picture that didn’t quite come out is of the small strip of stores on North Pleasant Street.  Here’s the Google Maps version:

That corner spot where Zanna is now, used to be where Al Bum’s was back in the 80s (and I think into the very early 90s).  My dad brought me here probably around 1985 or 1986, as it was one of the few record stores I knew of that carried Beatles bootlegs.  A year later when I discovered college radio, it became an important and expected stop for finding the punk, college rock and industrial sounds that I couldn’t find at the malls or department stores.  When my friends and I headed down here, we’d almost always stop for an hour or two and dig through the bins.  Al Bum’s played a significant part in my music collecting during that time; what I didn’t buy at Main Street Music in Noho, I bought there, with a very minor percentage bought at the music stores at the Hampshire Mall.

[As an aside, there was a satellite store for Faces (more on that in part 2) that was partially hidden behind that Mobil gas station next door.  Within that was a mini-store that sold cassettes and cds called For the Record.  I bought a handful of tapes from there between 1987 and 1989.  It’s since become a dilapidated and empty warehouse.]

Lastly, a picture from our trip back in 2012.  There’s a stretch of Route 202 in New Salem that cuts through a tiny corner of Shutesbury for a few hundred feet before popping back in.  I was always amused by this little bit of ten-second town-hopping, and sometime around 1985 or so I got into the habit of holding my breath between the two town signs.  I got all my friends to do the same, so when we headed back home from an afternoon or evening from the Valley area, we’d always do this.  Thirty years on and I still do it every time I come back and visit.

Coming Up: Views of Northampton and maybe a bit of Boston as well!

1 thought on “WiS: Points of Interest 1”