A few more pictures from our visit to New England a few weeks ago…this time focusing on Northampton.  Our road trips in 1987-88 often included a stop or two down here.  I obviously gravitated towards the record stores and sometimes the book stores, but there were also quite a few excellent restaurants here as well.  It’s still one of my favorite places to go when we’re in the area.  I would not mind living here either, if it were not for the fact that we’d have to deal with snowy winters!

Downtown Northampton, north side of Main Street across from City Hall

Here’s a panoramic shot of part of downtown Northampton, as seen from across the street in front of City Hall.  That alleyway is Cracker Barrel Alley.  We used to park in the lot back there during our trips to Main Street Music, which is where Village Salon on Main is now, to the left of Starbucks.  Here’s another view of the Alleyway.

A few reasons I show this. On our trips to MSM, there was many a night’s end when we’d be walking down this alleyway and back to the car, clutching our latest spoils and already planning when we’d borrow them for further dubbing.  In fact, after our shopping we’d often hang here for a good half hour, talking about all sorts of things before we had to head back home.  It has not changed one bit, maybe aside from the repaving.

Second?  See that building in the background?  That community-themed mural has been there for decades (and touched-up here and there), at least since the 80s.  But the important part was that boring little brick wall around the corner from it.  About two stories up, someone sometime in the early 80s spraypainted the word ‘ANARCY‘ in large black letters.  No idea how they got up there, and I don’t think anyone fessed up to it, either.  But promoting anarchy to the point that you deliberately spell it wrong?  We loved that idea!  It fit in with our 80s small-town nonconformist ideals quite nicely.  I think it stayed up there at least until the early 90s when it was finally powerwashed off, but I’m sure most Smithies and other Five College kids from that era will remember and cherish that tag.

And when I was down here with family, while I spent most of my time (and money) at MSM, my dad would often go a few doors down to…

…which not only is still open, but still looks the same after all these years!  This indie has always been a mix of commercial, obscure, and political since 1974.  It’s a quintessentially New England type of indie, a community-first type of store that offers the bestsellers alongside books on grassroots politics and local history. 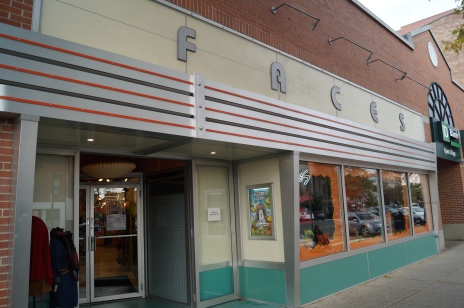 Faces, where many 80s rock pins for my denim jacket were purchased.

Ah, Faces!  It opened here in 1986 during the high point of that decade’s fashion, and catered to all kinds of ridiculousness.  This was your one-stop shop for dayglo clothing, fun printed tee-shirts, whoopee cushions, fake poop, posters (album, band, and black-light), disposable dorm and apartment furniture and accessories (in their huge basement), and anything else to make your college life California flashy in an otherwise drab New England.  And also where I bought a crapton of those pins you might remember seeing on denim jackets in that decade.  I usually went for the rock band logos, album covers, and the occasional silly jokey ones (‘I’m not weird, everyone else is!’).  It very nearly closed recently, but since it’s so beloved by students and locals alike, someone bought it from the original owner and it’s still alive and well.

Thornes Marketplace Building and environs, including a boot shop next door that I believe is older than me!

Just across the way from Faces is another hangout, Thornes Marketplace.  Their website states it took over the site of the old McCallum’s Department store in the mid 70s and by 1977 or so it got its present name and has been an indoor shopping experience ever since.  There are stores of varying shapes and sizes, from clothing boutiques to kitchen accessories and even an Acme Surplus in the basement!  Speaking of which, way down in the sub-basement (back parking lot level) was a huge used record store called Dynamite Records.  It didn’t so much cater to hard-to-find obscurities as it did those albums you never got around to picking up when they were new, or that one record you’re missing from some band’s discography.  This was a bit later on, I believe, maybe in the early 90s and into the early 00s, as I spent many an afternoon beefing up my back catalog with their selection.   OH!  Yes, and just around the corner on that side street to the right (Old Street) is Herrell’s Ice Cream, quite possibly one of the best local ice cream parlors in the area.

Pleasant Street, which really hasn’t changed all that much…aside from the storefronts

This little strip at the head of Pleasant Street has changed a bit over the years.  Northampton Wools is where Pleasant Street Video used to be for decades (said to be one of the best local rental places in town, and had quite the collection of popular and obscure titles).  McLadden’s Irish Pub has taken place of the former Pleasant Street Theatre, where all kinds of indie and low-budget movies would be shown.  I never went there until the mid-90s, but I did get to see quite a few great films there.  Their basement screening room was so tiny and oddly shaped, the first two rows had 3 seats on either side.  Further up is another record store I’d frequent in the 90s called Turn It Up! Records, down in a musty basement.  I usually went here for used cds, as their dollar bins were quite choice.  They’re still there, I believe!

One last thing I want to post here…it’s another ‘no longer there’ Google Maps embed, but it’s kind of important, at least to me!  It’s one of the stores in the strip mall on King Street, north of the town center, right near I-91.

This is the storefront where Northampton Newsroom used to be, back in the 70s and 80s (and I believe into the early 90s). It was your small WaldenBooks-style store with a selection of genres, a wide selection of newspapers and magazines, as well as candy, gifts and more.  I mention this place because in late 1984 during one of our family shopping trips down to the Valley, I bought a book here called Dragon Fall by Lee J Hindle.  It was the first winner of a YA writer contest for its publisher, and when I heard a teen had written it, a light bulb went off: hey, I could do this too!  I’d written some stories here and there that didn’t go anywhere, but after seeing this, there was no helping it…I had to be a writer too.  I started writing the Infamous War Novel in earnest and never looked back.

Hope you enjoyed the tour! 🙂