Okay, this is something I’ve posted on Twitter and elsewhere, but thought I’d collect some of my favorites here. These are pictures from our trips to London over the past couple of years…it’s kind of amusing, because A goes for the worldly historical sites and museums, and I’m all about visiting a city that’s ridiculously rich in rock music history. Whenever I could, I took a few snaps of places and images that reference some of my favorite songs out of the UK. 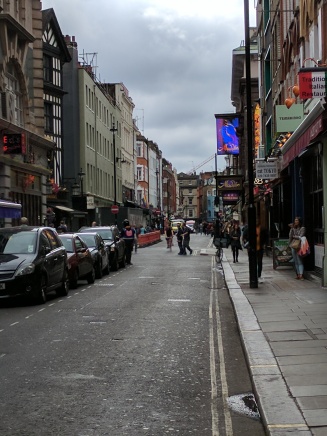 The man who drives many cabs down in Old Compton…
[from Belle & Sebastian’s “The Boy with the Arab Strap”]
We walked down Old Compton Street on our way to a lovely little tea shop on a side street.  It’s a hip and divey little street full of bars and questionable people, right off Cambridge Circus.

It depends how you’re wired when the night’s on fire, under the westway…
[from Blur’s “Under the Westway”]

This was the Westway bridge near the north end of Portobello Road.  Portobello is a wonderfully wacky street that’s got really nice row houses of bright pastel colors on one end (think the London version of SF’s Painted Ladies) and a lot of antique stores down the other end.  It’s hipster, it’s grungy, and it’s always a lot of fun.

She said ‘eh, I know you and you cannot sing’, I said ‘That’s nothing, you should hear me play pianer’
[from The Smiths’ “The Queen Is Dead”]
A rare Jonc sighting on his own blog!  Whodathunkit?  Heh.  Me standing in front of Buckingham Palace.  The Queen was elsewhere that week, so unfortunately the above conversation did not actually take place. 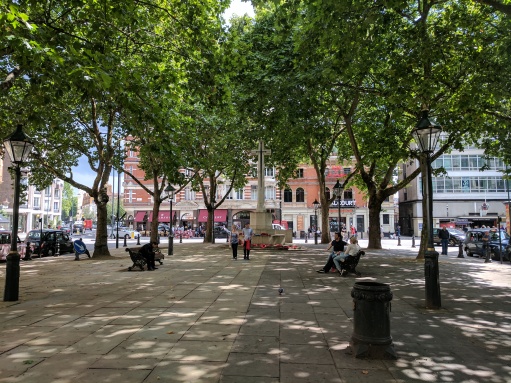 Oh, hairdresser on fire, all around Sloane Square…
[from Morrissey’s “Hairdresser On Fire”]

Really, Moz and the Smiths do namedrop a lot of London locations.  Sloane Square is on the far west side of Chelsea at the end of King’s Road and the area is Quite Posh.  Lots of high end boutique stores and bakeries.  And hairdressers. 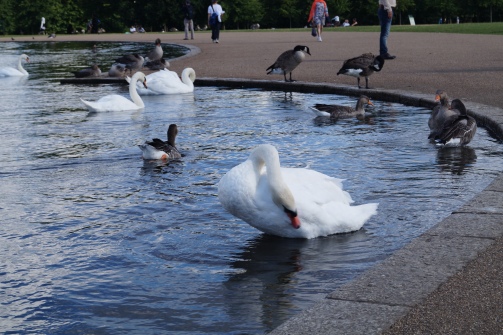 There are indeed a lot of swans (and geese, and ducks, and pigeons…) that live in Kensington Gardens and hang out at Round Pond, just outside Kensington Palace.  They’re fearless and will either ignore you if you’re just taking pictures, follow you around if you’re feeding them bread, or honk at you if you get too close. 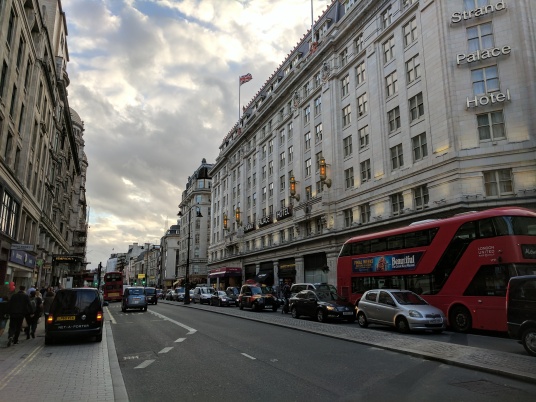 Dance on moonbeams, slide on rainbows, in furs or blue jeans, you know what I mean, Do the Strand…
[from Roxy Music’s “Do the Strand”]

The Strand is an upscale street just off Trafalgar Square where a lot of the big name hotels and theatres are.  It’s an incredibly busy street for both traffic and pedestrian, so yeah, you could say it’s a place to see and be seen…

I got married to the widow next door, she’s been married seven times before…
[from Herman’s Hermits’ “I’m Henry the 8th I Am”]

Did this song pop into my head when we visited Hampton Court Palace, one of Henry VIII’s favorite digs?  Of course it did.  Because I’m a goober like that.  Seriously, though, it’s a lovely place to visit.  Amazing gardens as well.

Give me one last kiss, before I walk out of this…
[from The La’s “Way Out”]

The Underground has some really great signage.  The older stops, like the above (I think this was from the Piccadilly Line at Earl’s Court station, if I’m not mistaken) have their signs inlaid or painted onto the tile.  They use “way out” instead of “exit” on their transportation signage so that La’s track would pop into my head every single time.

So why do you smile when you think about Earl’s Court?
[from Morrissey’s “Piccadilly Palare”]

You could consider this our home base during our trip.  This is the entrance to the Earl’s Court Underground station, servicing the Piccadilly and District Lines.  [It’s also a straight shot to Heathrow, which means no train changes at all when heading in and out.]  The places we’ve stayed are up one of the side streets, so it’s super easy for us to jump on the Tube when we want to head anywhere.  Earl’s Court Road is a busy one-way street (I think a lot of people use it to head from Cromwell Road down to King’s Road) that’s filled with pubs, restaurants and convenience stores, not to mention a launderette, which came in handy!  Oh — it also has its own TARDIS!  It’s mostly obscured in this picture, but it’s next to that news kiosk, with the top of it peeking out over that red car to the left.

I have a few more from a few years back that I’ll post a little later, but for now, here you go!  Thanks for waiting!