Hey gang! Sorry to let you down, but both blogs are going on a brief vacation for a few weeks. This next week is probably going to busy, between Day Job stuff and preparing for an actual trip (we’re heading back to New England to visit friends and family).

We’ll be back fresh and ready to go in November! Until then, don’t eat too much Halloween candy!

I usually make a good handful of mixtapes/compilations every year, but I’m falling behind.  The last one I made was late July, just before we headed out on our last vacation.  Considering we’ll be heading out on another one in a few weeks, perhaps it’s time to make another one.

Here’s a few favorite tracks of mine that have been getting some serious play lately that may just end up on my new mixtapes!

One of the things I’m looking forward to on the Blogging the Beatles 2 series is listening to George Harrison’s All Things Must Pass album, because it’s one of his best.  It’s at least four or five years’ worth of tracks that were nixed for Beatle work.  Indeed, after awhile he just decided not to offer and kept them for himself.

One of my favorite tracks from the album is “Beware of Darkness” which is a perfect example of George’s best songwriting.  It’s got a hauntingly beautiful melody, but it also showcases his penchant for using slightly off-kilter chord progressions.  They made sense and blended quite nicely, but they weren’t the chords you were expecting.  It often felt like he was trying to bypass the tried-and-true pop motifs of the day, and yet write a song that still contained a musical flow that was pleasant to the ears.  [I often think of Blur’s “Coffee & TV” as a similar example of unexpected-yet-logical chord progressions.  There were a lot of alternative songs in the 90s that took this strange route, much to my delight.]

And as before, I plan on trying to play along on my guitar while I’m relistening an relearning these songs.  Suffice it to say, I still feel like I’m extremely out of practice.  It’s not a good sign that a few of my guitars sometimes have a fine layer of dust on them.  And if George is going to tempt me with his B-A-G7-G#m-C#m (there’s a lot of wacky barre chords in there, folks), then there’s a hell of a lot more I need to learn.  Especially if I want to try it with my acoustics.

This is going to be an interesting exercise, to say the least.

On a final note, here’s an excellent cover of the same track by Concrete Blonde, from their debut self-titled album.  It’s a bluesier, heavier version, but it retains the dark hints of tension found in the original, and it’s one of my favorite covers.

Others have commented: it’s going to be the Beatles’ solo years next!  This one’s gonna be a long series, so I’m pretty sure I’ll be featuring it on specific days…maybe offering it every other Wednesday or something.  We shall see.  This may take some time for me to build up a backlog, as there are quite a few releases to plow through — and I’m not going to include the multiple reissues that have taken place over the years.  One last note: I’ve already decided this is going to be chronological, just like the previous series, so this means we’ll be visiting all four solo discographies at the same time.  I will also be featuring multiple releases per post, or else I’ll be posting until 2019!

Until then, I’ll be providing the usual music posts on Tuesdays and Thursdays.

Thanks for joining in! 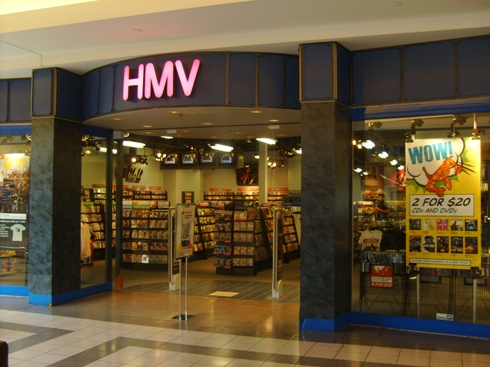 Not the one I worked at, but very similar in size and shape.

As of 23rd of last month, it’ll have been twenty years since I started that job at HMV Records at the Solomon Pond Mall down in Marlborough.  How do I know the exact date?  Simple:  I had a one-day training day at their Harvard Square store and the very first thing they had me do is price and security-tag a few hundred copies of Weezer’s Pinkerton and Sheryl Crow’s self-titled album, which was being released the next day.

That would end up being my primary responsibility (not including the occasional register jockeying) for nearly four years until I left in autumn 2000.  I’d also go to various shows in the Boston area, go to a few band meet-and-greets, and my music collection would expand to the point that I’d have to move it downstairs due to its size.

My music purchasing during my days in Boston were quite scattershot, as I would rarely have the money, but somehow I managed to dig through the used record shops on a consistent basis.  I’d buy a lot old albums in dollar bins, pick up cheap promo cassettes, and find good deals on new and used cds.  I’d borrow albums from friends and dub them onto cassette, just like I did in the late 80s.  My knowledge of releases was pretty much based on what I heard on the radio and read in the Boston Phoenix.

But when I was hired in September of 1996 to HMV, all that changed.  I was hired as the lone shipping/receiving clerk, partly because I was the oldest of the hires (I was 25 at the time, and everyone else was at least five or six years younger), and partly because I was such a huge music nerd.  I’m convinced I was hired because they could count on me to provide good customer service and upsell like no tomorrow.

The music of those four years influenced and inspired me deeply, as this was when I’d started taking my writing seriously.  A lot of what I listened to between late 1996 and late 2000 would end up being part of the soundtrack to The Phoenix Effect and later on the trilogy.

One of the things that I’d set off to do early on in the job was to listen to as much music as I could. I didn’t exactly need to buy the albums…I would open up a cd and play it in the back room, or borrow one of the store promo copies and give it a listen.  I’d also scour all the music magazines we sold.  That way when I was on the sales floor, I’d be able to help customers quickly and easily.  Each week I’d make a list of all the new and upcoming releases on a whiteboard near the door so all my coworkers would know what to expect.

My listening habits expanded to include all kinds of genres, ones I hadn’t paid much attention to in the past.  I still listened mainly to alternative rock, but I also listened to everything from electronica to classical to new age to prog rock and everything in between.

I also immersed myself in a hell of a lot of imports, as there were quite a few bands out there who weren’t getting any attention stateside but I thought were phenomenal.

I don’t think I have an actual count, but between 1996 and 2000, I’m pretty sure my music collection went from maybe a hundred cds, a few hundred tapes and about five hundred or so vinyl records to maybe around five thousand titles by the time I left the store.  [This was accumulated all over the place, really — the store as well as new and used bins elsewhere.]

And that’s not counting the years after that, when I made it a habit to stop at Newbury Comics in Amherst every Wednesday (alongside my comic book run, which I’d started during my HMV years), which expanded my music collection even further.

It’s been twenty years and my music collection is still growing.  I’m still checking out new music and different styles to this day.  As of this posting, the number of mp3s I own is in six digits.  [This is single songs, mind you, not full albums.  And there’s also A’s collection in there as well.]  That’s about thirty-five years of collecting, borrowing, ripping, and downloading.  I try to keep myself under control and set a decent cap on how much to spend (and reminding myself I don’t necessarily need to buy everything on its drop date), and I usually do pretty good with it.

But yeah…if it wasn’t for that job, one that I loved and still think about from time to time, my collection would probably be a bit smaller.

Probably not by much, though.

My Tweets
Cowgirl in New England

Something's wrong. It's not dusty here.