Now that I temporarily find myself with all the time in the world until further notice, I’m bound and determined to make the most of it. As much as I’d love to futz around with my mp3 collection and watch cat videos all day long, I know I’ve been given this time to do what needs doing.

In other words: remember all those times I’ve said “I’d love to do (x) if I only had time?” Well, NOW is that time. Let’s get crackin’.

One thing that’s been on my mind as of late is the fact that I have been woefully stuck at “amateur who knows some neat chords and solos but still plays the same damn songs over and over” level of guitar playing. I’ve been stuck at that level for years. I mean, there’s nothing wrong with that if I want to stay at that level, but I want to be better. I want to get to the point where, if I felt like dropping some tunes on Bandcamp for sale, I could do so and be proud of the results. Sort of like how I’ve worked on my novels over the years.

I’ve heard all the stories about guitarists like George Harrison who would practice on their guitar until their fingers literally bled. Bryan Adams sings about it in the first verse of “Summer of ’69”. I’ve read so many music bios and memoirs about building up those fingertip calluses and strengthening those fingers and working on dexterity.

I think, now that I have the time, I really should start doing exactly that. I no longer want to just noodle around for ten minutes playing the same chords. I want to explore this avenue. I want to see and hear where it goes. I want to find my own true style and not just imitate my influences. I have the equipment for it, so there’s nothing to stop me right now. 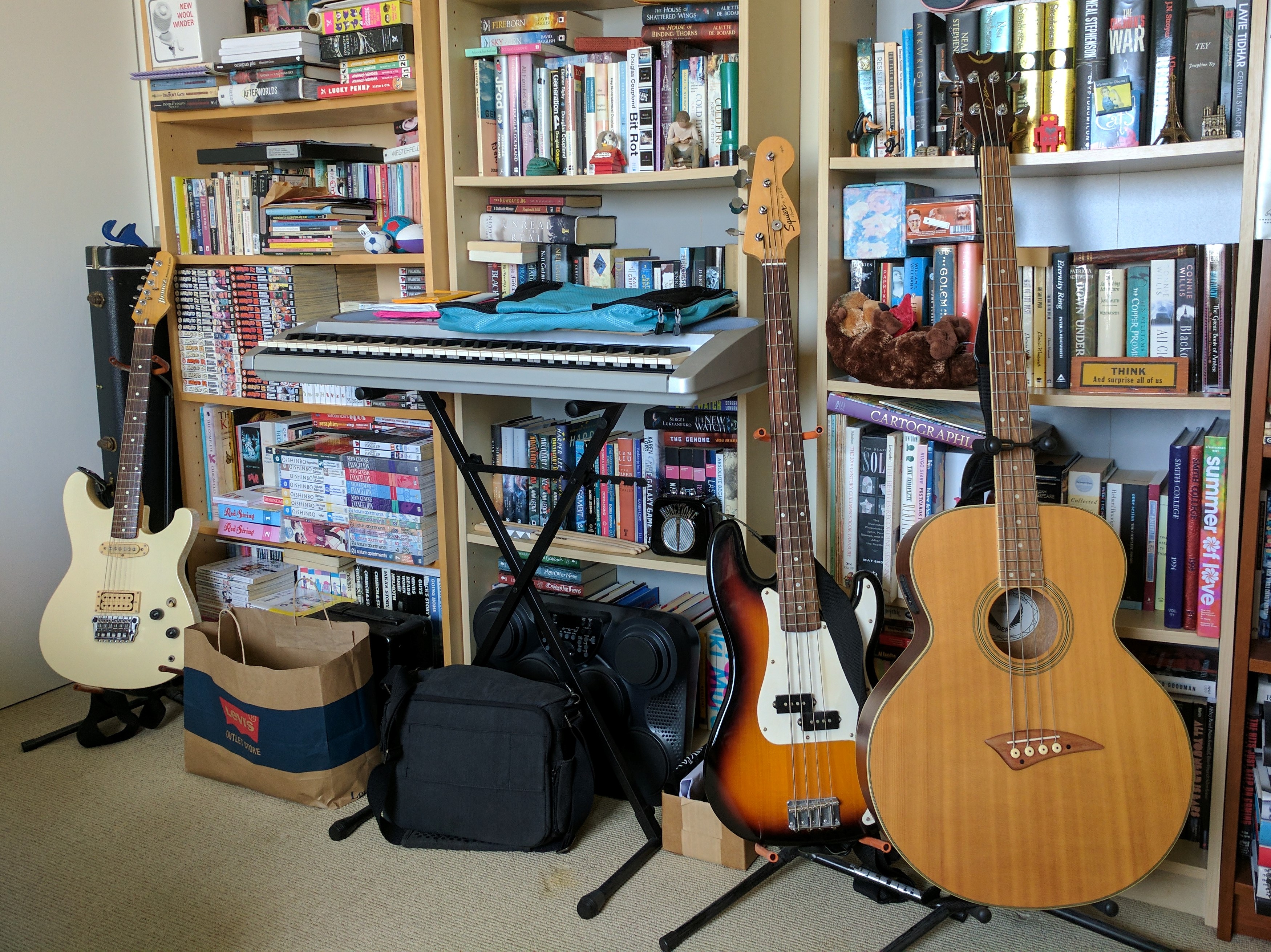 It’s not the fanciest gear, but it does its job.

First, here’s a video of The Smithereens playing “Blood and Roses”, one of their first hits and one of my favorite bass lines of the 80s:

Whenever I’m in a guitar store and checking out basses, I usually use that riff to test it out. It’s a relatively easy lick (even if technically it’s dropped down a half-step to E-flat) and if I can pull it off without my fingers cramping, then it’s a bass I can use.   I’m posting it here because it’s also a riff that I like to use when I’m practicing.

So what’s the deal here? Drunken Owl? What?

That’s the name of my current music project, named from the 18th century British slang term “drunk as an owl” (thanks to A.’s wide-spanning reading material for the source). It’s one of those phrases that doesn’t quite sound right logically, but makes for a good band name.

I’ve been meaning to return to playing and recording music demos for quite some time, though, like with most of my other grand creative plans, it was put aside so I could finish the Great Trilogy Revision Project.  So!  Now that that behemoth is out of the way, I can finally move forward with it.  I don’t plan on any grand masterpieces or anything…all I really want to do is lay down my songs.  I’ve amassed a decent amount of them over the years, and I’m itching to write and record some new ones as well.

And like my books, I want to see how far I can DIY it.  I’ve recorded a few demos on my phone, for starters.  [The sound is mono, but the quality is actually pretty good, considering!]  I plan on using the instruments I have already: the basses, the guitars, the keyboard, the funky lo-fi drum pad (it’s hiding behind my camera bag on the floor under the keyboard in that picture up top), and maybe some slightly better (but still relatively cheap) editing-mixing software.

Any plans on releasing them on Bandcamp or whatever?  Eh, probably not, but we’ll see.  I may just share them here or elsewhere.  The main reason for this ongoing project is mainly to make good on my lifelong loves of writing, music, and art.  [Yeah, I’m trying to get my art up and running again as well.]  The main goal here is to have fun with it!

[Edit: Just learned this morning that Soundcloud is going kerflooey.  Guess I’ll have to find a different embedder!]

Do me a solid and head on over to my bud Mark Stratton’s blog Aggaspletch (yeah, I’m not sure either, but I like onomatopoeia, so there you go).  He’s got a nifty iPod Challenge series going over there, and that there link is to a guest post about bass playing written by yours truly (yay me!).  He’s got quite the eclectic tastes in music, but he knows his stuff and he’s a great writer to boot.  So check it out!