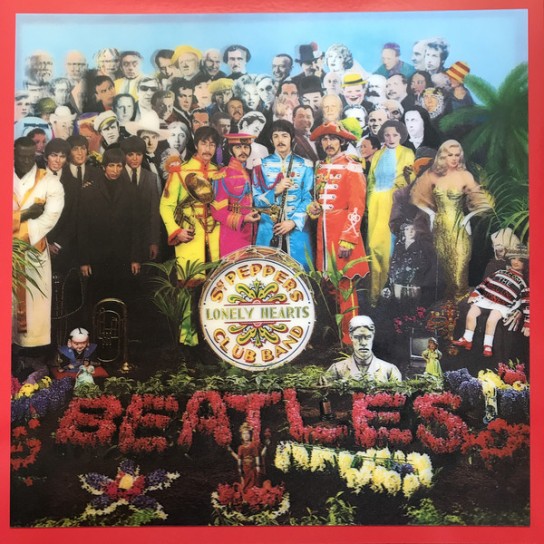 First off, a few notes:  Since I’ve already gone over the actual music on the original album and the Strawberry Fields/Penny Lane single here a good few years ago, I’ll be dispensing with that and talking about the sound of the remix.  Secondly, I’m going over the big box set and not the 2-disc version that’s also available.

I’ve been listening to this release for nearly a month now, just to get used to the sound, and I’d have to say that overall, the remastering/remixing was well done.  It’s kind of hard to say that about the original Beatles oeuvre, considering that nearly all of it was a four-track mix with a ridiculous amount of bouncedown* on many of the tracks.

*Bouncedown = a trick the band and George Martin used to employ to open up track space for more sounds.  A mix would be made for two or three of the four tracks, then would be ‘bounced down’ to the empty fourth track (via copying the master onto a new reel), thus freeing up three new tracks for more instruments.  The upside is being able to fill out the sound; the downside is slight degradation of the sound and possible muddiness in the mix.

One of my friends jokingly asked me if he knew how much Paul paid Giles to pump his bass so high in the mix, and to some degree I can see where he’s coming from.  At this point, Paul would lay down a simple temporary bass track to be recorded over later in the mix when he could add more flourishes.  A song like “Fixing a Hole” is a good example of this; the bass is all over the place on that one, so if your speakers or equalizer are a bit on the bassy side, it’s going to overwhelm the track.  A simple EQ adjustment of my headphones made it sound a hell of a lot better.

The levels of Ringo’s drums are pushed up a lot more than previous.  This has always been a big issue for me, especially for most of pre-Rubber Soul recordings, as quite often he’d be so far back in the mix that you barely notice him.  His drum work on this new version is now crystal clear and given an added punch, which works to great effect on many of the songs here.

“Lucy in the Sky with Diamonds” has always been one of my favorite Lennon tracks (not to mention one where I can only name one band whose cover has done it justice), and I love what they’ve done to this one.  The phasing on the vocals (which give it that spinny, whoosh-y sound) are much more pronounced here.

“She’s Leaving Home” is at the correct faster speed that was originally only used for the mono mix.  This version makes it sound like less of a dirge and more of a stage musical performance, and it sounds lovely.  The strings and harp are also clarified here.

“Within You Without You” is as mystical and mysterious as ever.  The only problem I had with the original mix is that it sounded a bit two-dimensional, if that makes sense.  The Indian instruments and the orchestral instruments felt squished together, with George’s vocals kind of thrown on top.  This mix gives the song a hell of a lot more room to breathe and meander.  The two cultures swirl around each other now, and George’s voice is stronger yet retains the tenderness.

The original mix also had some lower-end issues, at least to my hearing.  Both “When I’m Sixty-Four” and Paul’s section of “A Day in the Life” always sounded a bit muddy, as if the bass levels had been pushed up a little higher than necessary.  This has since been fixed for both tracks, thankfully.  “Sixty-Four” sounds less like a well-worn 78 rpm record and more like a live vaudeville performance.  Check out Ringo’s light tapping on his ride cymbal on that one — he does lovely work on it.

“Lovely Rita” – Another song that sounded a mess in the original, but sounds clearer, even though it’s still drenched in echo.  You can hear a lot more of the sound effect silliness on this one now.  I can finally also hear John’s mumble at the end. I can now hear him saying “I don’t believe it.”

And then there’s “A Day in the Life”.  My favorite track off the album, their magnum opus.  It sounds absolutely stunning, especially on earphones.  The orchestra swells are much clearer and wilder.  The final chord is mixed clearer (and you can hear Ringo shifting in his seat just before the final fadeaway).  My only complaint is that Giles didn’t retain the last transition (the ah-ah-ah’s) before John’s last segment.  My favorite part of George Martin’s mix was his gradual lift in volume of the brass and strings as John’s “ahs” fade further into the background; here, they’re mixed to remain in tandem.  Ah well, can’t complain.

And what of the extra tracks?  First off, the remixes of “Strawberry Fields Forever” (done in 2015 to go along with the release of the 1 cd/dvd remaster) and “Penny Lane” (brand spankin’ new) give the two tracks even more punch than before.

The sequence of the tracks on the extra cds in the box set are chronological, so you truly get to listen to the album as it’s being written, recorded, and put together.  Multiple versions of “Strawberry Fields”, the first on the list, show its evolution from a light track that might have been at home on Revolver to the darker, more ominous track we all know and love.  It’s not until they finish “A Day in the Life” (fourth in line, after “Sixty-Four” and “Penny Lane”) that the album really starts to take shape, and more of the songs start taking on a more common theme or sound.

Also included is the original 1967 mono mix — not the 2009 remaster, but the original 1967 mix as made by the Beatles and Martin themselves — and a few odds and ends, including the extremely rare “Penny Lane” US Mono promotional mix with the extra horn segment at the very end of the track.

Non-musically, the packaging is outstanding!  The hardback book that comes along with it is a wonderfully written historical document of not just the recording sessions but what was going on in Britain at the time, both socially and politically.  The cds and dvds are in a recreation of the vinyl album cover, complete with the lyrics on the back.  A recreation of the original ‘Mr Kite’ poster owned by John and a large advertisement for the album are also attached, as is the original cut-out sheet (featuring sergeant stripes, fake mustache and so on) from the original album.
Final thoughts?  The big box set is definitely for completists, as there’s a lot of repetition; more passive fans will probably want to pick up the two-disc “anniversary edition” that takes the best of the extra tracks (and the two current-mix single tracks).  It sounds great and looks great.  [And of course most Beatles fans are dearly hoping that the other albums get this treatment, though we won’t hold our breath.]  Highly recommended.

Come on, you knew it was coming. 🙂

I’ve been obsessing about this release since hearing about it some months ago, and since it’s such a landmark album — not to mention this release being the only time so far that a full Beatles album has been given a completely new stereo remix — I think it’s only fair that I give it the BtB treatment, now that I have it my grubby paws.  I’d like to go over what one can expect: the differences in sound between the original mono and stereo mixes, and the new 2017 stereo mix.

[Alas, I do not have a 5.1 sound system so I won’t be able to provide any input on that at this time, though it’s part of the big box set edition.]

Chasing big dreams one photo at a time